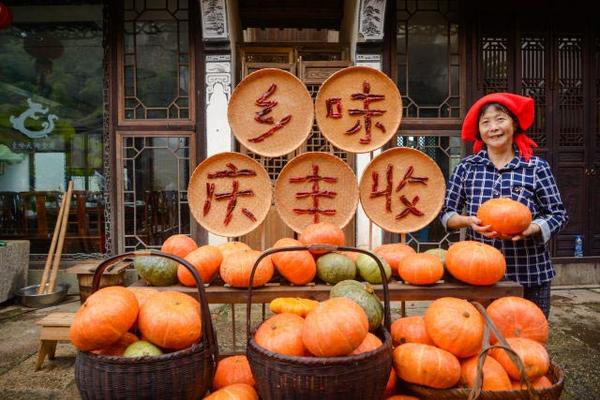 A farmer in Wanggu village, East China's Jiangxi province, poses for a photo during the harvest festival on Sept 23, 2018. [Photo provided to chinadaily.com.cn]

ZHENGZHOU - The Autumnal Equinox, one of the 24 solar terms of the Chinese lunisolar calendar, fell on Sunday. For millions of Chinese farmers, this year's Autumnal Equinox was a little special as it marked the first harvest festival.

This event is also the first festival created by the State specifically for the country's farmers.

At a time when China's major grain-supplying areas have entered harvest season, Jia Jianyu, a 36-year-old farmer in Central China's Henan province, is busy picking honeydew melons on his farmland.

Once living under the poverty line, Jia began to cultivate honeydew melons in 2016. In his hometown Lankao county, melons grow in spring and autumn.

Total revenue from a single melon greenhouse could reach nearly 20,000 yuan ($2,900). This business has the potential to help him shake off poverty, according to Jia.

"I want to further expand the planting area, but I did not have enough money," he said.

In the same year, the county sub-branch of the People's Bank of China (PBOC), the central bank, completed building a rural credit information system, in which Jia was assessed as an AA client.

With the AA credit certificate, he got a loan of 40,000 yuan from a local commercial bank. He had not only expanded his plantation but also bought a truck with the money.

Having contracted about 1.2 hectares of farmland, Jia now has 13 melon greenhouses.

Jia's ability to obtain a loan from the bank demonstrates how financial services are helping grassroots in China, amid its drive to eradicate poverty in 2020.

Usually, an overwhelming number of Chinese farmers turn to friends and relatives if they want to raise money, since most of them have no experience in dealing with financial institutions, nor do they have credit ratings.

"Since most farmers have no cashable assets to mortgage, the bank staff prefer to lend money to large enterprises," said Cheng Guanhua, an official with the Lankao subbranch of the PBOC.

However, over the past several years, an increasing amount of farmers' credit information has been incorporated into the national credit database and similar platforms. Thus, there has been an increase in the credit value of farmers.

The rural credit information system in Henan, for instance, has already been used for 173 programs in the fields of poverty relief, rural governance and legal issues.

According to the Zhengzhou central sub-branch of the PBOC, since the system started running last March, it has taken in more than 13 million farming households as of this July, making up 80 percent of the total farming households in the province.

As the country continues to optimize its rural credit system, the financing environment in rural areas is improving.

Statistics released by the PBOC indicate that in the first half of 2018, farming households' loans have experienced a jump of 87.4 billion yuan compared to the same period last year.

The improving credit information of farmers will help channel more capital to develop the agriculture industry and boost rural vitalization, according to Li Quan, an associate professor at Lanzhou University.

Apart from the 13 melon greenhouses, Jia has also planted corn and peanuts.

"If I pay back all the money in time, I will have a higher credit rating, which also means a more favorable interest rate," he said.