Culture Plays Its Part in Friendship 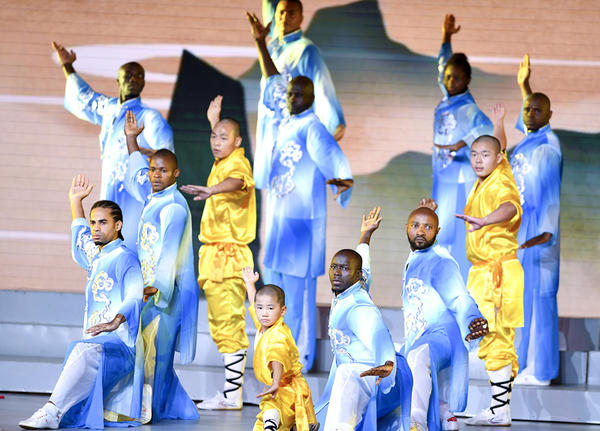 Chinese and African kung fu practitioners perform at the Great Hall of the People during a gala on Monday night welcoming African leaders to the 2018 Beijing Summit of the Forum on China-Africa Cooperation. [Photo by Yan Yan/Xinhua]

More than 20 participants from seven African countries demonstrated Chinese martial arts at a gala on Monday night welcoming African leaders to the 2018 Beijing Summit of the Forum on China-Africa Cooperation.

The performance was a way for them to celebrate their graduation from a three-month training program at the Shaolin Temple, a Buddhist monastery in Henan province that is also revered by devotees of kung fu. It was the sixth set of training sessions exclusively for African students.

From Egypt's pyramids and the Great Sphinx of Giza to the Masai Mara National Reserve in Kenya, pictures of breathtaking African scenery were juxtaposed in the media center of the FOCAC Beijing Summit.

Many Chinese journalists passing by couldn't help staring at the landmarks and murmuring: "I really want to go there one day."

A two-day summit in Beijing is short, but these glimpses may create lasting ties between Chinese and African people's hearts.

"Tourism has become a flag carrier in China-Africa people-to-people connectivity," according to a report released on Monday by the China Tourism Academy, the data analysis center affiliated with the Ministry of Culture and Tourism, and several leading Chinese tourism websites.

A boom has also been seen in cross-border cultural activities.

The Ministry of Culture and Tourism listed 168 major cultural communication projects between China and Africa since 2016, including exchange exhibitions, visits of art troupes and symposiums.

As platforms for cultural communication, 54 Confucius Institutes, mainly in universities, and about 30 Confucius Classrooms set up in elementary and high schools, have been opened in 41 African countries. They have enrolled 1.4 million students and contributed to establishing Mandarin as part of the national education systems of 14 African countries.

"Africa is the wellspring of human civilization," said Wang Heng, deputy director of the Institute of African Studies at Zhejiang Normal University in Hangzhou, Zhejiang province. "It's also an important part of the Belt and Road Initiative. People-to-people exchanges are becoming more frequent."

Wang's institute is the first comprehensive research institute on Africa at a Chinese university.

"The FOCAC Beijing Summit presents a new horizon for people-to-people exchanges in the future," she said. "The communication will become more abundant in content and will be well-planned through sincere, pragmatic approaches."